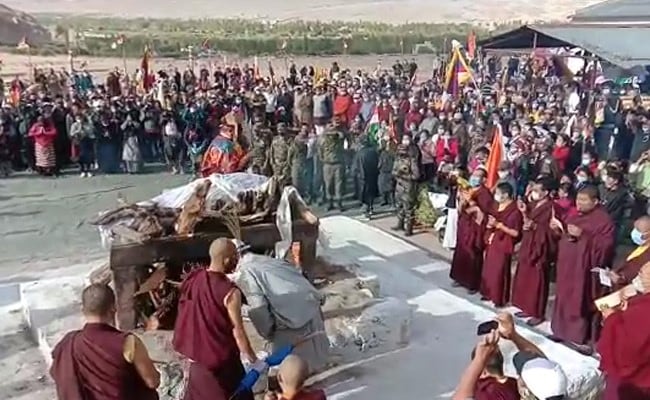 The death of the Tibetan soldier offered a rare glimpse into a little-known group of elite warriors.

The Indian Army and members of the Tibetan community in Leh paid their last respects this morning to Tibetan soldier Nyima Tenzin, who was cremated today. Nyima Tenzin, a part of the once-secret Special Frontier Force (SFF) composed of the Tibetan soldiers who operate under the command of the Indian Army, was killed in action last week after he stepped on a vintage landmine in South Pangong.

Among those who paid their last respects was the BJP leader Ram Madhav. The BJP leader shared pictures of the funeral in a tweet, which was later deleted.

Soldiers of the unit owe their allegiance to the Dalai Lama, the flag of Tibet and the flag of India. They are among the foremost mountain warfare experts and trained to operate behind enemy lines in Tibet.

The death of the Tibetan soldier offered a rare glimpse into a little-known group of elite, high-altitude warriors. The force recruits mostly from Tibetan refugees, hundreds of thousands of whom have made India their home since the Dalai Lama fled Tibet following a failed uprising in 1959. Some are Indian citizens. Few details are publicly known about the covert force set up soon after a war between India and China in 1962. The strength is estimated to be more than 3,500 men.

“The two sides should continue their discussions, including through diplomatic and military channels, to ensure complete disengagement and de-escalation and full restoration of peace and tranquillity along the LAC (Line of Actual Control) at the earliest,” the Defence Ministry said in a series of tweets on Saturday, hours after Defence Ministers of two countries – Rajnath Singh and Wei Fenghi – met in Moscow, Russia.

(With inputs from Reuters)