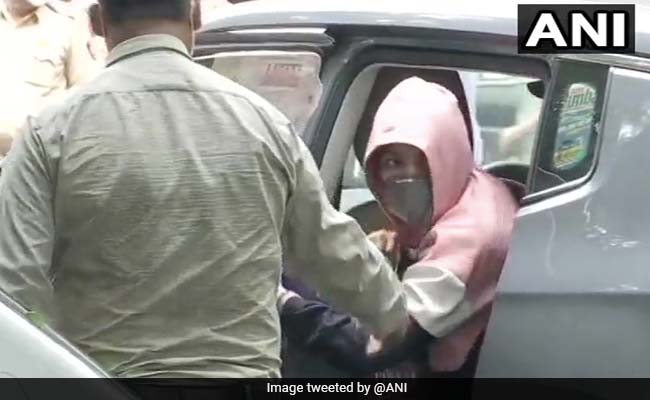 Actor Rhea Chakraborty is being questioned by the Narcotics Control Bureau again, day after she was grilled for over six hours as part of an investigation into an alleged drug angle in the Sushant Singh Rajput death case.

Ms Chakraborty, who was first summoned by the anti-drugs agency on Sunday morning – two days after her brother Showik was arrested by the probe agency – has been called in again today.

As Ms Chakraborty appeared before the Narcotics Control Bureau for questioning her lawyer Satish Maneshinde said the actor — whose relationship with Sushant Singh Rajput ended a week before his death — had said she was “ready for arrest” as it was a “witch-hunt”.

The actor was also mobbed by a horde of mediapersons, sparking criticism as many questioned the behaviour of journalists. “Is there any work ethics for media?” National Commission of Women chief Rekha Sharma tweeted.

Ms Chakraborty’s brother Showik Chakraborty was arrested on Friday by the Narcotics Control Bureau along with Samuel Miranda, Sushant Singh Rajput’s house manager, and charged with the anti-drug law. They have been sent to the agency’s custody till Wednesday.

No drugs have been found on Showik Chakraborty yet.

The investigation started after WhatsApp chats retrieved from Ms Chakraborty’s phone revealed an alleged conversation between her and a contact saved as “Miranda Sushi” – believed to be Samuel Miranda – about procuring drugs.

The agency has told a Mumbai court that there are “specific roles/ingredients of criminal conspiracy, abetments and various attempts to commit offences”. “The financial trail of all previous transactions of drug purchase has to be verified, it had added.

Rhea Chakraborty and her family have said a “simple, middle-class family’ was being targeted as part of a “witch hunt” and were being vilified by the media. After Showik Chakraborty’s arrest, his father had said that he was now expecting the arrest of his daughter.

“Congratulations India, you have arrested my son, I’m sure next on the line is my daughter and I don’t know who is next thereafter. You have effectively demolished a middle class family. But of course, for the sake of justice everything is justified. Jai hind,” read the statement from Lt Col Indrajit Chakraborty (Retd), who has also been questioned by the CBI for days.

The death of 34-year-old Sushant Singh Rajput and its various angles are being investigated by three central agencies — the Central Bureau of Investigation and the Enforcement Directorate along with the Narcotics Control Bureau — after a huge legal and political battle.

Rhea Chakraborty and her family have been accused of taking crores of rupees from Sushant Rajput and having a role in his death — allegations they have repeatedly denied.