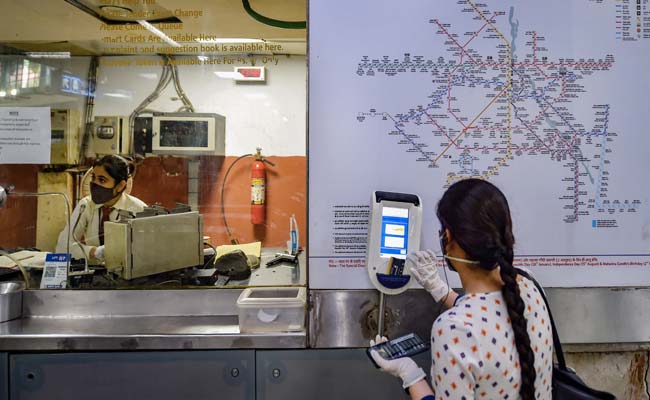 The resumption of Delhi Metro services on Monday brought smiles back on the faces of commuters in the national capital, but many said the closure of most entry-exit gates caused delay and  inconvenience. A Delhi Metro employee said he had to spend more time walking to the gate that was open at the GTB Nagar Metro station as the other gates were closed.

“The gate nearer to my residence is closed. So, had to walk to gate number five which took extra 10 minutes,” he said. However, the journey remained smooth right from entering the metro premises to boarding the train and exiting the station at the destination, he added.

Jyotsna Singh, 28, who travelled from HUDA City Centre to Central Secretariat station, said she usually exits from gate number one, but it was closed this time. “I had to take a detour and exit through gate number 3, which took 5-7 minutes extra. I was prepared for such minor delays  considering the situation,” she said.

A number of passengers faced difficulty buying new smart cards or getting them recharged through cashless modes due to network issues. At a few stations, such as Central Secretariat, Chawri Bazar, and Chandni Chowk, passengers said there were hiccups while making payments for new smart cards or recharging them online due to non-availability of mobile network on the station premises.

Luckshay Gupta, 28, said issues in online payment caused a minor delay during his travel from Chandni Chowk to Race Course. Rohini Bansal, 25, said she tried getting her smart card recharged online but it could not be done due to network issues. “Money got deducted from my account, but the transaction failed. I waited for 15-20 minutes at Central Secretariat metro station before I left the premises and took an auto to work,” she said.

The Delhi Metro resumed services in a graded manner on Monday, with elaborate measures for crowd management and ensuring hygiene to check the spread of the virus. The Yellow Line connecting Samaypur Badli and HUDA City Centre in Gurgaon was the first one to be opened. The services resumed at 7 am with strict safety and social distancing measures in place.The trains will operate in batches of four-hour each from 7-11 am in the morning and 4-8 pm in the evening.