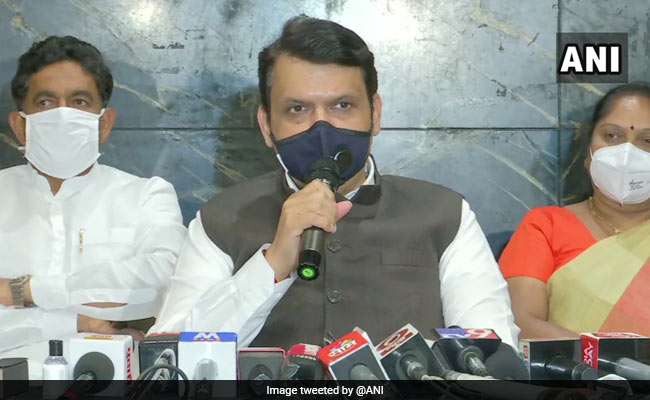 Leader of Opposition in the Maharashtra Assembly Devendra Fadnavis today slammed the state government over its handling of the COVID-19 crisis, alleging that it only trying to show the number of cases of low and was not focusing on more tests.

During a debate on supplementary demands in the Lower House, Mr Fadnavis said there was no audit of medical expenses incurred and that there was an overall mismanagement of the pandemic.

The BJP leader said when the budget session of the Maharashtra legislature ended in March this year, the number of COVID-19 patients in the state was 26.

“Chief Minister Uddhav Thackeray reviews only the COVID-19 situation in Mumbai, while Deputy Chief Minister Ajit Pawar is interested in Pune. Don’t Aurangabad and Nagpur come under Maharashtra. Have you reviewed the situation there and understood the regions need?” he asked.

Mr Fadnavis claimed all government decisions taken so far were only on paper while the ground situation was different.

“The government only wants to show COVID-19 numbers are low and is not focussing on more tests. We are ready to cooperate with the government in tackling COVID-19, it is up to the government realise the seriousness of the situation,” the former Chief Minister said.

He said there is a need to review the treatment protocol, and noted that there have been instances of side-effects among those who have recovered from COVID 19.

“Have the non-paying poor and the middle class been left to die while only the rich can survive COVID-19?” he asked, while demanding more RT-PCR tests, oxygen supply and isolation facilities for patients.

Mr Fadnavis alleged that the jumbo facilities set up for treating COVID-19 patients were mired in corruption and have not benefited the needy.

“The government has to understand that there is an increase in the percentage of virus spread,” he noted. He also targeted the government for incidents of atrocities against women in COVID-19 care centres.

Mr Fadnavis further said farmers were facing difficulties, but the government “turned a blind eye” to their problems like lack of seeds, not getting market price for their produce and crop damage due to excess rains.

“The government is interested only in bureaucratic transfers. Administrative expenses for transfers is Rs 500 crore. Is it necessary to transfer bureaucrats in a pandemic?” he asked.

Mr Fadnavis also asked the government to reconsider the proposal to shift the Metro car shed from Aarey Colony (Mumbai”s green lung) to Pahadi Goregaon, and said the government should function for people and not to satisfy egos. Keeping the Metro construction work shut in Aarey is causing losses worth Rs 400 crore, he claimed.

“No detailed project report has been prepared yet for shifting the car shed. As per technical experts, there is technical difficulty in merging line 3 with line 6 of the Metro,” the former chief minister said.

He said the Aarey area was earlier chosen for the car shed by his government because no other area was feasible.

“Don’t make everything a prestige issue. Even the high court had cleared the Aarey car shed,” he said.

Mr Fadnavis also hit out at the government over complaints of inflated electricity bills from several power consumers.

In sarcastic remarks, he said, “This government understands only what celebrities say. Asha Bhosale, Tapsee Pannu, Renuka Shahane all have highlighted the inflated electricity bills they have got.”

“He hasn’t even tweeted about the situation. Only Rs 16 crore have been earmarked for relief,” he claimed.

Targeting the government on the issue of final year university exams in the state, Mr Fadnavis said, “You can’t take populist decisions every time. You have to take hard decisions keeping in mind the future (of students),” he said.

Mr Fadnavis also hit out at the government for ignoring the demands of milk producers, who have been seeking a hike in milk procurement prices.

“The government has no vision for welfare of any section of the society,” he claimed.