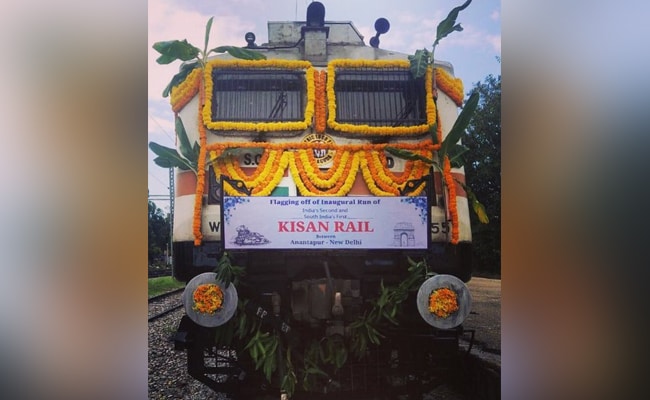 Connecting the farmers to the agricultural markets, the first Kisan Rail was flagged off from Andhra Pradesh, on Wednesday, carrying 322 tonnes of fresh fruits to the Azadpur Mandi in Delhi. Union Minister for Agriculture Narendra Singh Tomar and Andhra Pradesh Chief Minister YS Jagan Mohan Reddy flagged off the Kisan Rail via video link from New Delhi and Amaravati.

The Kisan Rail comes as a boon to farmers, particularly those growing horticultural crops, as it ensures the produce reaches the markets quickly. “This gives immense benefits to the farmers in many ways. Huge quantities can be transported in one go, the transportation time is reduced, costs are cut and losses are also minimal,” Collector Chandrudu told news agency PTI.

In the existing system of transportation by trucks, post-harvest losses of about 25 per cent were causing a loss of Rs 300 crore a year to the farmers. “We can now eliminate this as shipment by Kisan Rail will keep the produce intact and fetch a premium price. Besides erasing the loss due to transportation damages, farmers can also stand to gain Rs 400 crore annually by realizing a premium price on their produce,” Mr Chandrudu added.

Anantapuramu in Andhra Pradesh is considered as the ”fruit bowl” of the state, where the cropped area under horticulture is over two lakh hectares. While consumption of fruits and vegetables within the state is only around six lakh tonnes, the rest is marketed across the country and abroad.

“Sweet oranges, bananas, mangoes, papayas, pomegranates and melons are our major produce and they have a good market in Delhi, Rajasthan, Madhya Pradesh, Goa, Tamil Nadu, Haryana, UP, West Bengal, Gujarat and Karnataka. Most of these fruits are also exported to Bangladesh, Nepal and Middle East countries,” the Collector said.

According to plan, the Kisan Rail will run once a week now but as the harvesting picks up after October, the frequency may be increased based on the demand.