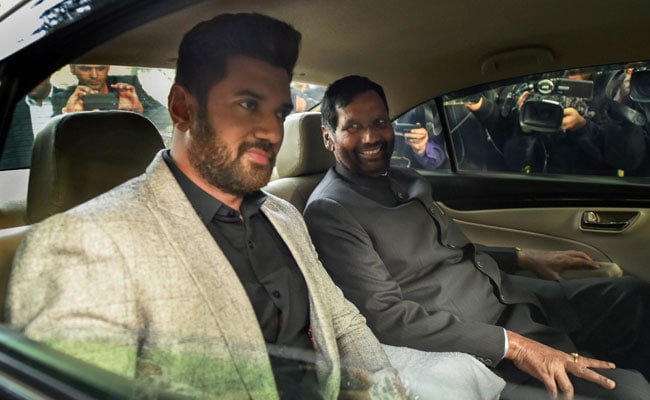 Bihar Chief Minister Nitish Kumar hasn’t fulfilled the promise of free land made to members of the scheduled caste and scheduled tribe communities, Lok Janshakti Party chief Chirag Paswan said in yet another scathing letter to their out-of-favour ally Janata Dal United on Sunday. The missive came a day before he and his father, Union Minister Ram Vilas Paswan, will discuss with party leaders the prospects of contesting the upcoming assembly polls against the ruling party.

Chirag Paswan, 37, who has been attacking Mr Kumar over a host of issues and had rallied behind the opposition over deferring the Bihar polls because of the coronavirus pandemic, today demanded jobs to all those from the communities who died during the Chief Minister’s 15-year-long rule.

Chirag Paswan, in separate letters earlier, had slammed the Nitish Kumar government over its handling of the coronavirus and flood situations.

The Lok Janshakti Party will convene a meeting of its Bihar leaders on Monday, where it is likely to explore the possibility of fielding candidates against ally Janata Dal United in the Assembly election – due later this year – amid worsening ties in the BJP-led National Democratic Alliance.

Both the parties have been launching attacks on each other over the last few months. Mr Kumar’s recent decision to join force with former chief minister Jitan Ram Manjhi, a Dalit leader like the Paswans with a history of acrimony with the LJP, has further worsened their relations.

The Paswans, however, have not directly attacked the BJP, which has been saying that the upcoming elections will be contested under the leadership of the JDU chief and with all the existing allies.

According to reports, the Paswans, in the meeting, might discuss with their leaders the feasibility of an arrangement wherein the party will stay put in the NDA and contest only against the JDU, not against the BJP.

Similar electoral strategy had worked for the LJP in 2005, when the party had played a pivotal role in stopping Lalu Yadav’s RJD from winning yet another term in government. The LJP, a Congress-RJD ally then, had contested polls against Mr Yadav’s party only, which resulted in a hung assembly. In subsequent polls, Mr Kumar got enough seats to form his maiden government.

If the LJP – which has notable support among the Paswan community and other scheduled caste communities – decides to contest against the JDU-BJP combined, the opposition is likely to benefit.

The Election Commission is likely to announce the election this month.