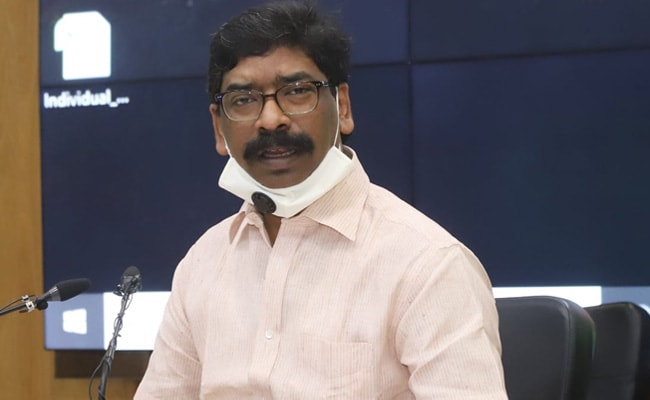 Hemant Soren is heading a coalition government in Jharkhand consisting of JMM, Congress and the RJD.

Jharkhand Chief Minister Hemant Soren wrote to Prime Minister Narendra Modi on the centre not giving full Goods and Services Tax (GST) compensation to the states, saying this “act of sovereign default” runs against the very spirit of the cooperative federalism.

In a letter addressed to the prime minister, Mr Soren said this is symptomatic of the “withering trust” between the centre and the states.

In the letter, dated September 4, Mr Soren said the states were given assurance that the centre would compensate the losses they suffer or the next five years, but it has just been three years, and “we find ourselves deserted”.

“Reluctance and inability of the GOI to give full compensation to the states is betrayal of the commitment it made in the Union Parliament and also in all the council meetings held so far (sic),” the Chief Minister said.

Mr Soren is the latest non-NDA chief minister to come out against the centre’s offer on the GST compensation to the states.

Mr Soren is heading a coalition government in Jharkhand consisting of JMM, Congress and the RJD.

West Bengal chief minister Mamata Banerjee has also written to Modi, saying depriving states of GST compensation is an “attempt to undermine federalism” and urged him not to believe the trust between the states and the centre on the issue.

Besides the two, the chief ministers of Punjab, Kerala, Delhi, Chhattisgarh, Telangana, Rajasthan and Puducherry have also rejected the centres proposal.

Ms Banerjee and Mr Soren were among the opposition parties CMs who had participated in a virtual meeting called by Congress president Sonia Gandhi, a day before the GST council meeting.

In the 41st meeting of GST Council on August 27, Union Finance Minister Nirmala Sitharaman had said that the COVID-19 pandemic is an “act of God” which has hit GST collection and ruled out paying compensation to states from its coffers.

As per the centre’s calculations, the compensation requirement of states in current fiscal would be Rs 3 lakh crore, of which Rs 65,000 crore would come from levy of cess.

Out of the shortfall of Rs 2.35 lakh crore, the shortfall due to GST implementation is Rs 97,000 crore and the remaining is due to COVID-19 impact.

The centre has given two options to states – to either borrow the entire Rs 2.35 lakh crore or borrow only Rs 97,000 crore through a special window, which would be provided by the RBI- to meet the revenue shortfall.

Referring to the prime minister’s speech at the launch of the GST in July 2017, Mr Soren said, PM Modi had portrayed the new tax regime as a great example of cooperative federalism that would herald inclusive growth of the nation.

“I echo your sentiments but you would agree that India as a nation can grow only if its constituent states also grow and become self-reliant. But reluctance of the central government to fulfil its constitutional obligations regarding GST compensation goes against the interests of the states and the spirit of cooperative federalism,” he said.

“… Jharkhand contributes to compensation fund a cess of nearly Rs 5,000 crore from the mineral sector alone. What we get in return is just a paltry sum of nearly Rs 150 crore as monthly compensation.”

“And now we are being asked to borrow at a time when the state is hard pressed to fulfil salaries of government servants,” he added.

Mr Soren said that as the state’s economy is in a precarious situation at present, it needs more funds to take care of farmers, migrant workers, those in the unorganised sector and unemployed youths.

Urging the prime minister to intervene in the matter and issue directions to the ministry concerned for the release of the compensation amount, Mr Soren said, it will not only melt away all the apprehensions but also reinforce the trust in the spirit of cooperative federalism.