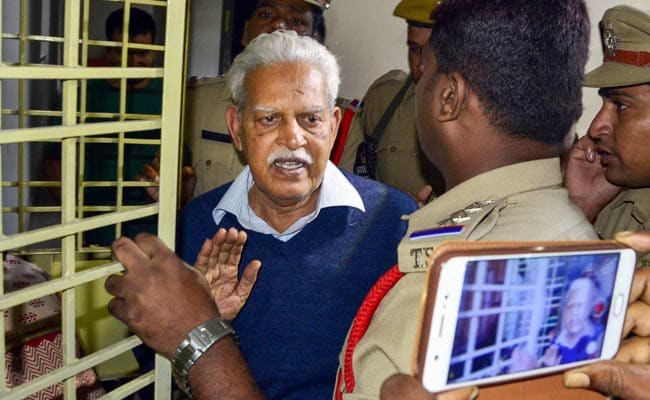 Varavara Rao and nine other activists have been arrested by Maharashtra police.

Two sons-in-law of Telugu poet and writer Varavara Rao, who has been arrested in connection with the Elgar Parishad case, on Monday said they have been issued notices by the NIA seeking their appearance before the agency.

K Satyanarayana, professor at the city-based English and Foreign Languages University (EFLU), and the other son-in-law, a journalist with an English business daily, said they received the notices sent by the National Investigation Agency, Mumbai, asking them to appear before itas witness on September 9.

K Satyanarayana said he has no connection with the case.

In August 2018, the Maharashtra Police had raided the residence of the professor.

Varavara Rao and nine other activists have been arrested by Maharashtra police in the Elgar Parishad-Maoist link case which was initially probed by the Pune police and transferred to the NIA in January this year.

The case relates to alleged inflammatory speeches made at the Elgar Parishad conclave held in Pune in December 31, 2017, which the police claimed triggered violence the next day near the Koregaon-Bhima war memorial.

The NIA notices seek their (professor and the journalist) appearance/attendance as a witness “for answering certain questions regarding the case along with supporting documents.”

“It is a fact that I am related to Varavara Rao but I reiterate that I have no connection with the case, ” K Satyanarayana said in a statement.

“NIA notice adds to our family distress at a time when Varavara Rao’s health condition is not very good and the (COVID-19) pandemic is fast spreading in Mumbai. I was summoned to Mumbai in these terrible times,” he said.

The Pune police also claimed that the conclave was organised by people with alleged Maoists links.