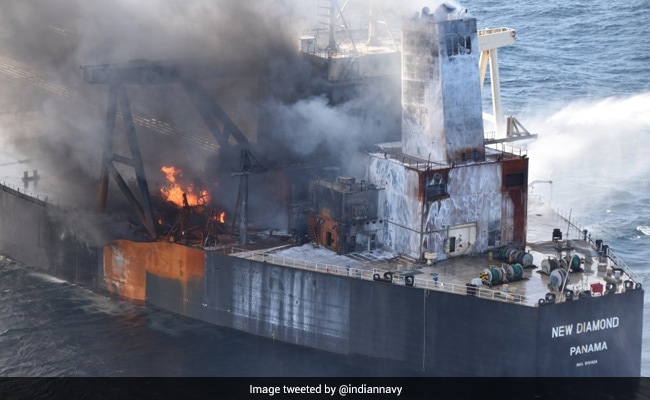 The ship carrying 270,000 metric tonnes of crude oil from Kuwait to India had caught fire on Thursday.

The fire on board oil tanker MT New Diamond has been “successfully contained” with India’s help, the Sri Lankan Navy said today, adding that the ship has been towed to the deep sea away from land.

“The fire on board MT New Diamond has been successfully contained to a greater extent. As a result of the combined operation, the ill-fated oil tanker has been secured from all sides.” the Lankan Navy said in a press release.

The oil tanker is currently 70 km away from Sri Lankan coast and is being escorted by INS Sahyadri, according to the latest update from the Indian Navy.

The ship carrying 270,000 metric tonnes of crude oil from Kuwait to India had caught fire on Thursday.

Indian ships pressed into service after the Lankan Navy sought assistance to control a fire onboard the tanker off the coast of Sangamankanda in the eastern district of Ampara.

The oil tanker had 23 crew members – 18 Filipinos and five Greeks. Twenty-two of the 23 member crew had been safely rescued off the tanker — a Filipino sailor died in the boiler explosion in the engine room.

The continuous cooling effect during the disaster relief operation has controlled the fire-spread, the Sri Lankan Navy said, adding that there is no risk of an oil spill so far.

With inputs from PTI